X Mouth Syndrome (XMS) is a French band set up by Dragan Vujcic (previously involved in Buzz) and joined by 3 more members. Two albums “Find A Way” (2011) and “Chrome III” (2012) remained rather unknown while having joined EK Product, XMS will possibly reach a wider audience with their new work.

I can already tell you that I was deeply impressed by this production that features 20 songs. XMS originally wanted to compose a kind of electro-punk music, but it rather sounds like a melting pot between EBM, power-pop and a very discrete punk flavor. The punk touch comes through on one of the very last songs (cf. Sell My Brain”), which seriously speaking is not their most convincing side.

“Dirty Grace” mixes pure and old-school EBM songs reminding me of the hard-core format of Nitzer Ebb and other EBM cuts, which are softer and mixed with pop elements. Both sides reveal a cool production and clear, but charismatic vocal parts. The album takes off with the original “Balkan”-song, which is an instrumental cut carried by strong EBM vibes while diversified by pure Balkan-like ingredients. The title song coming up next sounds like refreshing EBM carried by a cool melodic tune. “Androgyny” is a similar sounding cut. There’s a great harmony between EBM and pop elements which will catch your attention for its alluring vocals.

The real first hard-core EBM cut (cf. “The Cry”) sounds pretty cool except that the vocals don’t fit here. There’s a real hiatus between the power and tempo of this song and the rather soft vocals. The other hard cuts are more in balance and are great songs in the purest tradition of EBM music. “Just Need The Beat” and “Never Crawl” both are noticeable cuts. But there’s much more for the old-styled EBM fans. “Play” sounds a bit like the offspring between Front 242- and Nitzer Ebb. This is a great piece of music featuring a carrying chorus.

The softer part of the work remains however ultra danceable and powerful. It’s here where XMS mixes their EBM basis with pop elements. “Together” is a pretty well-crafted cut with again an irresistible chorus. But I also like the vocals’ production on this song and especially during the chorus where the vocals have been dubbed. Female vocals can be heard as well on “Dirty Grace”. “Just Say” and “Find A Way” both are remarkable songs lead by the sexy, but power-like voice of Amélie. This album really has a lot to offer while there are not many releases today that feature 20 songs. Most of the tracks are pretty short, but totally accomplished.

X Mouth Syndrome is a real great discovery in the wider EBM fields. This is a fascinating EBM experience revealing a talented formation made in France. 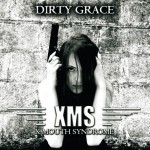