Cardinal Noire’s 2015 debut lived and died by the listener’s affinity for mid-period Skinny Puppy deep cuts. A self-aware tribute to the more psychedelic and densely produced of the Kevins’ work, it was a record which reveled in reference, and which, in my opinion, pulled its tribute off well, with an even mix of immediate attack and heavy-duty programming. CN vocalist Kalle Lindberg’s returning to his solo project Protectorate (which technically predates Cardinal Noire), and while it’s far from a radical departure from the mid-period electro-industrial sound of his other act, there are some substantive differences which should be appreciated by exactly those same folks who’d be drawn to Protectorate in the first place.

Leadoff tracks “Exile” and “Infocom” (not sure if that’s a Zork shout-out or not) might not sound so different from Cardinal Noire at first blush, but studious adherents of the classics will notice how much more heavily than their cousins these compositions rest on the mechanized funk of Protectorate’s basslines. Programmed syncopations drive the tracks forward and remain their bedrock, no matter how many shearing pads or bile-soaked distorted vocals might wing about them. While Cardinal Noir flung itself whole-hog into the most experimental ends of electro-industrial, Protectorate cleaves to the genre’s roots.

At the same time, it seems to cast a slightly wider net when it comes to influences. Later, when guitars emerge in “Clean Break” and “Proconsul”, Protetctorate drive home the point that their interest in classic Vancouver fare doesn’t begin or end with Skinny Puppy. Indeed, both FLA and Numb’s rhythmic presence is felt; there’s some Millennium-style juggling of guitars and programming, and the way Lindberg’s vocals bounce off of the programming doesn’t feel too far removed from Wasted Sky. With guitars in the mix, it feels important to underscore the distinction between electro-industrial which features some guitar and actual industrial metal: Lindberg keeps things firmly in the former category, though “Severed Heads” may fall a bit close to traditional rock breakdowns.

A traditionalist strain of electro-industrial, especially one so proximate to the classic Vancouver bands, is still a bit of an odd listening experience for me at a personal level. So many of those records are tied into my understandings of what music was or should be completely exploded, and so hearing them being approached with a sense of nostalgia seems somewhat contrary to what they connote to me. But whether it’s in the guise of Cardinal Noire or Protectorate, Lindberg is carrying the sound ably, making everything weird familiar again. 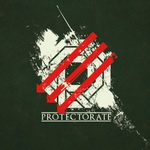