When the symbiosis of man and machine working in unison to create music results in something as menacingly dark as Protectorate, one can only take a step back and gather one’s breath. What we have here is a phenomenal piece of art. Art that challenges. Art that unsettles the human psyche. Art that is unrelentingly aggressive and thoroughly bleak in nature.

The quality of this album really should not come as no surprise to anyone who is familiar with Kalle Lindberg’s other band, Cardinal Noire. While both bands adhere to a strict industrial discipline of ominous darkness and harsh tension, Protectorate takes a slightly more direct route in inflicting its viciousness, incorporating a more direct structural song approach using more complex layering. Paradoxical perhaps, yet it works magnificently well. If there was ever a track written to encapsulate a simulation of being tortured with a pneumatic drill, album opener “Exile” is exactly that. The industrial brutality is jaw-droppingly great. Full of old-school industrial sounds, Protectorate has a sound influenced by the past yet also by the current world we live in. “Clean Break” lulls the listener into a false sense of security with a slower start, only to yield to cavorting, twisted electronics, jackhammer beats, distorted guitars and Lindberg’s screams. It’s a sound Protectorate has perfected here and its gloriously dark. “Neoraktion” conveys that darkness in fine form, with atmospheric synth lines in the background working with the beats to envelop the song in blackness.  Similarly with “Overproduction”, where the disjointed rhythmic pattern makes for an unsettling feel to the track. “Severed Heads” has a more melodic feel to it, with an obvious verse/chorus structure to its electro-industrial-rock core. Heavy as hell and completely fantastic. “Empty Faces” closes the album in a sufficiently bleak manner, truly demonstrating there is no light at the end of the tunnel.

At times, this album almost comes across like Skinny Puppy’s Last Rights beating to death Ministry’s The Land Of Rape And Honey. There’s a combination of SP’s dark atmospherics and Ministry’s aggression present, but Protectorate is more than a sum of its influences. It’s a statement of intent – Kalle Lindberg is here in full force and ready to take his industrial crown. 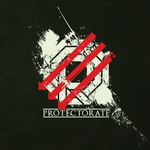