Published by Alessandro Violante on June 2, 2016

Stompers of the whole world united! On 4th March, Italian label EK Product released the last album of the Finnish duo Oldschool Union, titled Perjantai, a word that means Friday. Who already knows Seppo Ahlstedt and Janne Vilen‘s previous works, will know what to expect from this album. Here their formula isn’t so different from classic EBM style: a music with a clearly old school (in music and aptitude) approach, influenced by a punk attitude and all the classics of the genre, above all by Nitzer Ebb. A list of songs, sometimes faster, sometimes more mid tempo-oriented, but always extremely immediate and relatively simple, with a short length.

The lyrics are in Finnish (impossibile to understand by not Finnish speaking listeners), used to mark the origins of the duo, and at the same time, as in the best tradition of the genre, there’s a certain interest for different cultures (here for the Eastern culture) that emerges in the final song Endissä.

The meaning of their monicker is clear: the Finnish duo’s goal isn’t certainly to innovate the genre, but to follow its trademarks, presenting to the listener an ironic and urban mood, along with the fast basslines and slight melodic variations typical of this genre, which we have already listened several times. But that’s what the most ardent fans want to listen: simple and powerful songs that, particulary in Kapinaan, recall “That Total Age” musical approach several times.

The alternate versions of certain songs here and there emphasize the character of the original ones, but they aren’t much different from them. If you’re a passionate fan of the so-called Anhalt EBM, this album is for you, as well as for the addicted old school fans. Others won’t be astonished, but even only by reading their name, you know what to expect. Beers, combs, muscles, irony and a slight social element: This is Oldschool Union’s imaginary, take it or leave it. 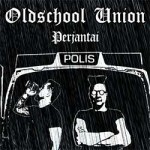