The return of the Mexican Red Industrie is an important event in the alternative technological music scene and another opportunity to experience their energy and irreverence. After the previous and appreciated album “Destroyer”, published in 2012, Helder Camberos and Jesse Eddie refine in 2014 their evolution with the new, splendid full-length titled Censored.

Conceptually provocative, vocally cold and sarcastic, this work incorporates texts as sharp as blades within a composite style that interact with EBM, Techno Body Music and Future / Electro Clash elements, a combination musically lethal in which the chant becomes a proclamation of all the rage and the reproach of a distraught and rebellious generation, while the sound-system, often structurally variable in its schemes, are a synergy of danceability, of melody and electronic discipline.

The joint action by the drum machines and programming generates squared and pulsing rhythmics, as well as the linear and monolithic Helder’s singing never stops scratch your hearing, attacking it with ruthlessness, following the irresistible synth’s harmonies and the electric flows generated by guitar: the new release, subtitled with the slogan “Protest En Un Mundo Sin Rebeldes”, will catch you with its sixteen tracks among which there stand out the contributions from People Theatre, HIV+ and Psyche, plus two cover-versions of Apoptygma Berzerk and the spectacular floorfiller remixes processed by Neikka RPM, Tecnoman SF, Dark Control Operation, LA- X, TourdeForce and Matsfer.

Red Industrie will surprise their many international fans, but also all who will listen to their music for the first time, deserving by the album “Censored” one only adjective: exciting! 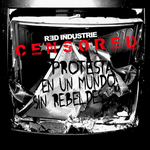