Sixteen new and amazing songs announce the return of the legendary Russian artist Tcheleskov Ivanovitch, a protagonist that since early 80’s has contributed to spread the EBM sound in Europe by the Belgian project called Ivanovitch DLO created with the second member Trevosky.

The Tcheleskov’s one-act Grandchaos is still one of the greatest expressions of Electronic Body Music culture, whose discography must necessarily reside in the collection of every fan of this genre. The new album “We Suffer When The World Changes” is the apotheosis of the irreproachable style of this artist: inside its tracks they perfectly interact old-school EBM, Techno Body Music and functional electro geometries, devised for to make you move following sharply fractionated and pulsing rhythms of drum-programming, minimal executions of synth and dark baritonal-filtered vocals.

The guest of honor is the Belgian EBM / electro / industrial musician Jacky Meurisse, which participates in two spectacular songs, while the remixes by Ethan Fawkes, Atropine, VV303, # 366: A Live Lifed and Parade Ground definitely enrich the tracklist spreading a contagious vitality. Grandchaos deserves a prominent place in your preferences and this exceptional release will know how to make you dance uninterruptedly throughout the Autumn and beyond! 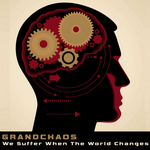