Cardinal Noire: creators of menacing angry and deeply dark sounds that are like an extraplanetary subsoil from which they emerge persistently a galaxy of disturbing modulations.

Their sequence immediately inspires a sense of violence and oppression that the listener perceives in the recesses of his brain, until the achievement of a total state of alienation and the full awareness of being projected into a cycle of torment without end. Cardinal Noire is also the title of this important debut-album that focuses in its core a complex EBM/industrial musicality overflowing with aggression and icy ruthlessness, conditions arising from the inner darkness so intensely ingrained within the mind of the protagonists. Nine songs for nine expressions of technological nightmares, all this by harsh -hallucinated vocals that lacerate hearing, by murky emissions of synths and by hammering rhythmical beats that explode in the surrounding space with all their strength.

The pressing dynamism generated by voice and instrumentation spreads waves of anger and malevolence that devastate the sonic structures even in their less furious instants, ecstasizing all fa ns of the obscure electro music. In the tracklist solely dominates the logic of hellish, annihilator synthetic frequencies, which have only one specific target: you and the total destabilization of your mind. 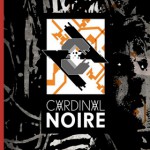