Anger and technologically advanced sounds converge in this new masterpiece of Atropine.

After the excellent performance of their previous album “Recurring Nightmares” the Norwegian duo-act is ready to impress all the fans with another great album, starting from its amazing sleeve to the last beat of drum-machine. “Assailant”, composed of fifteen advanced EBM / Industrial tracks, is a creation of ALX and Cthulberg which are reconfirmed one more time as real electro entertainment experts. “Assailant” is characterized by an impressive vocal acidity, disciplined drum-programming automations, disturbing obsessive melodies and by a strong electronic energy.

Computers, analog hardware, vintage samplers and modular synthesis generate an incandescent mass that will mercilessly assault the listener’s auditory system, seeking to invoke an oppressive sense of mania and urgency. 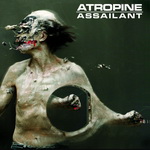