There’s something oddly appropriate about a musical act coming from the Gem City that makes electro-industrial music. Think about it: the harsh, loud, clanging, buzzing sounds of soulless machines making stamping and stomping sounds at a steady, unwavering rhythm used to be a familiar noise coming from all the factories and plants that once populated our fabled city. Likewise, this style of music also shares many attributes with the atmosphere of the birthplace of aviation: an ambiance of bleakness, coldness, and bitterness akin to a Dayton winter comes to mind. With all this in mind, it’s actually rather surprising more music of this nature isn’t being produced in the Gem City. But one of the few artists exploring the realms of electronic and industrial music in our little Midwestern town is Hexadiode.

Hexadiode was hatched by Dayton music scene veterans Jonas Miseh and Tim Krug in 2014 while the two were playing together in the reconstituted edition of Dementia Praecox.

“Jonas had been writing some new songs for the band, and it just felt kind of odd to be presenting the new material under the flag of Dementia Praecox,” Krug says. “The more we worked on the songs, the more they seemed to take on a new identity, and Hexadiode was born.”

The songs they began working on became an unsettling mix of whirring and beeping electronic blips, eerie synths, and marching, kling-klang rhythms, hard yet danceable, which are both a tribute to and a continuation of some of their musical inspirations and beyond.

They are influenced by what Krug calls “a lot of the classic industrial bands, and more experimental electronic artists. Bands like Skinny Puppy, Liars, Nine Inch Nails, Nitzer Ebb, Aphex Twin, Front 242, Autechre, and the like.”

Krug and Miseh began recording in Dayton when they suddenly found themselves in talks with Italian electro label EK Product about releasing Hexadiode’s recordings.

“We had been recording and Jonas kept putting our rough mixes up on SoundCloud,” Krug says. “Somehow, Amedeo over at EK Product found us through those tracks. He wrote us in December, and after talking, ended up offering us a contract for two CDs to [be] released in Europe. We’re still looking for a label in the states, but for now, we’re self-releasing the vinyl version of Ibex.”

Hexadiode’s Ibex is a compelling collection of tracks that don’t merely rely on cold, harsh electronic aesthetics. Most of the tracks are fully fleshed out songs with structure and surprising melodies, which can be quite catchy to the well-tuned ear. The mostly monotone, barked vocals of Miseh harken back to the classic industrial music of the 1980s that the duo loves so much, and is a great thrill for fans of that genre’s apex years. Despite this attribute and utilizing a lot of vintage keyboards and electronics to create the music, Ibex doesn’t sound dated; it’s a powerful listen.

“Underneath, we think there are still some catchy earworms and solid beats if you like to dance or sing along,” Krug says.

And, despite the album’s recent release in June exclusively in Europe and online elsewhere, Ibex has already been garnering rave reviews.

“So far, the response has been overwhelmingly positive,” Krug says. “We’ve gotten some pretty nice write-ups in the U.S., Germany, and Ireland. Also, we’ve been getting some regular airplay in places like Brazil, Australia, Boston, Nashville, plus a lot of internet radio.”

So, some of you may be wondering if and how Hexadiode is able to recreate these otherworldly sounds and songs in a live setting, but, shockingly, their live presentation sticks closely to their sound on wax – with a deeper, more immediate effect on your ears and psyche.

“We perform everything with hardware – no laptops, just drum machine, sequencer, sampler, a few synths, a lot of effects, and a mess of patch and midi cables,” Krug explains. “We’re not just letting the machines do all the work for us. I’m able to sample and loop and mangle Jonas’ vocals live. We can tweak any sound you hear on the fly. We try to keep it interesting, and every time we play a song it’s going to be a little different. Also, we bring four or five amps, so there’s still a stage volume of a full band – the sense of space and depth you get sonically from having different speakers across the stage for the different instruments.”

As for the future, Hexadiode is going to try to capitalize on their European connections and newfound success, even if it’s just a step at a time.

“We are going to try to tour as much as we can,” Krug explains. “We have some things in the works regionally, and maybe once we get our passports sorted out, we can get over to Europe sometime next year. Meanwhile, we’re just going to keep trying to move forward – write more material and try to get out in front of as many people we can.”

Gary Spencer is a graduate of Miami University and works in the performing arts, and believes that music is the best. Contact him at GarySpencer@DaytonCityPaper.com. 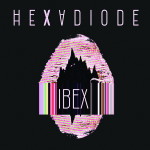