Neostalgic Industrial worthy of a place in your collection.

The Swedish Industrial duo Guilt Trip pours from the well of influences on their latest release “Brap:tism”, which is yet another modern Industrial album with clear references to the classics of the eighties. The album was released around Christmas by Italian label EK Product.

The term “Brap” was introduced by Skinny Puppy and roughly means “Get together, connect electronic instruments, get high and record music”. It is however unclear if that was the process in this case.

The twelve tracks on the album present a sound that is crisp, innovative and has elements from other sub genres in electronic music which is highly appreciated. It is also sprawling in its shape and sometimes contain minimalistic parts and sometimes episodes of a more epic style. From time to time I hear Godflesh but with more dormant guitars. The sound also has obvious influences from the North American Industrial scene but wrapped in a funky coating.

The first thing I notice is that the vocals seem drowsy and dull with lyrics full of contradictions like “Yes – No” and “Right – Wrong”. I could be so honest to say that if you can’t sing as high energetic as ohGr and have nothing of importance to say you shouldn’t try. If they meant to mimic Al Jourgensens typically self-confident American vocals they fail at that too. This is however nothing that is that specific on all of the tracks and somehow you get used of it. It is definitely not the case on the weird “Politalk” and the amazing “Wormwood” and “Fist Resist” which are among the highlights of the album. There is no obvious low among the tracks and they all contain something that elevates the overall experience. The finishing track “The Itch” reminds you of the more experimental sides of “Dead When I Found Her”.

“Brap:tism” grows on you as you accept the somewhat odd elements and realize that Guilt Trip has released a really good album that immediately should be placed in your nostalgic collection of Industrial gems. 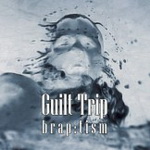