Josh from Dark Essence chats with Kalle from the Finnish electro-industrial band Cardinal Noire. Their debut album Cardinal Noire is out now through EK Product. 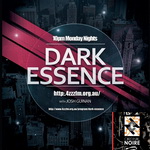