Alright, so, we all know that there’s this huge “been there, done that” mentality with a lot of listeners when it comes to Old School EBM acts, and, well, that fucking remains true in most cases. I’ve listened to dozens upon dozens of EBM albums and, quite frankly, a lot of them sound similar when compared next to one another. It’s a sad case, and you simply cannot reflect the greats of the genre in order to craft something of your own. But, there’s also that small percentage of bands that are able to create something that isn’t necessarily a new sound, but one that is able to allocate the sounds of the past with the new and really put out a good album.

That’s where Combat Voice steps in. Already given love on the site in the past with their 2011 release The Last Flow, their latest album Geopolitics Whispers & Agony pushes out another fast paced album that’s fun to get through.

However, let me get through what I found to be oddly plain in this album. First, the themes. Yes, just by looking at the tracks’ titles, you can automatically detect that vibe of challenging government and authoritarian power. Second would be the vocals. Though they fit well at certain points, they also manage to fail at others, especially in songs where a shouting backing vocal comes in right behind the main, low pitched lead singer. That was painful to listen to at points.

However, forwarding to the good, we are delivered thirteen tracks that have a certain oomph attached to them that other bands lack. I cannot sit here and point out anything that is brand new, nor absolutely riveting, but the beats within the songs ARE different than what I heard a few times in the past. You can get your boots on and stomp to this album as much as you want, and I don’t think you’ll tire of it. It’s EBM, definitely, sometimes a little sludgy sounding, but it’s still EBM through and through, and that’s really the only word I can use to describe the album in whole.

Of the two mixes attached, the first was forgettable. I don’t think the artist behind it really added his own vibes to the song, and if I listened to it without knowledge that it was a mix, I’d have to say that it sounded like it belonged right on this album with the rest of the tracks. It bored me. The second mix, however, was done well. Synth work becomes profound, and piano work included in, it was actually quite better than all the tracks that were canon.

However, now that I’m done saying what I have to say, let me get back to my beginning message. Yes, there are artists who push out good albums, and I believe that Combat Voice has done a good job in doing so with this album. However, fact remains that it still is much more a blend of the past than the new. And that’s where the album falters. I like the sound, I really do, but lackluster vocals and songs that sound all too familiar, even when blended with modern touches, actually hold back this album.

But, still, it’s fun to dance to. At least I think it is. If you do listen to this, make sure you have a sound system that can crank out bass, as I think that’d be the best way to experience these guys. 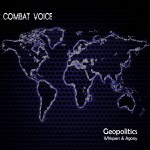