Cardinal Noire is a duo hailing from Finland, which has accomplished their debut album for the EBM devoted EK Product.

The least I can say is that this formation has the potential to become one of the most promising newcomers in the dark-electro universe. The work of Cardinal Noire is sophisticated and filled with multiple sound layers. The overwhelming sound atmospheres and complexity in writing often remind of Skinny Puppy. I can’t say that we here get a new emulation in the genre, but the Canadian masters clearly have been a potential source of inspiration.

After an intro-like debut cut “Narkomat” clearly reveals the essence of this work. It’s a well-crafted electro composition characterized by subtle details and an overwhelming sound creation. Most of the tracks sound like you’re progressively getting imprisoned into a dangerous sound web. Cardinal Noire appears to be a kind of imaginary sonic spider spinning an overwhelming sound web from which you can’t, and don’t want to, escape.

The “Cardinal Noire” universe is a fascinating voyage reflecting a high sound intelligence revealed by the musicians. Next to a few hard and merciless cuts like “Mkiv-Eternal” and “A New Form Of Machinery” the album also features the quieter sounding “White Dust”, which is accentuated by a doomy and dense electronic atmosphere. The vocals become pretty spooky empowering the anguishing and somewhat paranoid aspect of the song. “Flagellant” moves on a similar way although becoming harder.

The work moves back into harder fields, which have been progressively building up. “Black Sustenance” is one more noticeable cut, but my absolute favorite is “Purgation”. This is a composition revealing different influences, but especially the heavy epic part makes this song irresistible. It sounds pretty heavy while experimental sound treatments and other manipulations are noticeable elements as well. There also is a dark melodic passage, which makes sound the song a little cinematographic-like. The least I can say is that Cardinal Noire doesn’t repeat itself, and clearly explores different dark territories of electronic music.

Conclusion: Get ready for an anguishing experience in dark-electronics. Cardinal Noire is a band to keep in mind and an electro formation adding some diversity to the EBM roster of EK Product. 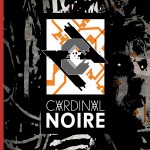