Content: Bodykomplex is one of the new-coming bands in the fields of EBM. The Finnish duo was set up in 2012 and were composing EBM songs for fun. I think that’s the right spirit to start off and 3 years later they’ve now joined one of the supreme labels of EBM: EK Product.

“Karma” features 14 pretty short songs. All the songs are in between 2 and 3 minutes. It’s pretty EBM-like as well and there also is a kind of parallel with punk songs. I guess it’s not a coincidence if Bodykomplex mention punk as a possible source of influence.

Bodykomplex indeed deals with good-old ‘retro’ EBM, which will remind you of bands like DAF and Orange Sector. There’s a similar and typical 4×4 structure carried by fast and dry bass lines and a linear, pogo-like cadence. The sound is simple, but efficient. The main particularity of the band is the language as all the songs have been sung in their Mother tongue. Finnish is a quite particular language, which in a way still makes the strength of the band. And even if you don’t understand a single word of the lyrics (which seem to deal about stories of the daily life) there still is a carrying force emerging from some of the choruses.

Musically Bodykomplex doesn’t innovate, but reveals to be a talented young formation. This album doesn’t really sound like an official debut. You can feel certain maturity and even a personal touch, which in a way makes the difference with the aforementioned major bands. Several songs feature a simple, but efficient string passage. It injects a kind of melody line, which sounds like accomplishing the songs by an extra, but important element.

Conclusion: “Karma” is an album that will ravish the EBM community and it’s really good to have this new band on board. It’s also a bit symbolic to see EK Product releasing the “Archives”-album by 90s Finnish EBM proud Advanced Art while Bodykomplex might be seen as a potential new revelation. 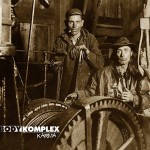