Finnish EBM band Oldschool Union was originally set up by Seppo Ahlstedt and Janne Vilen. They released two retro- and hardcore like EBM albums on EK Product. But after “Älä Ole, Elä!” (2012) and “Perjantai” (2016) singer Janne Vilen left the band and got replaced by V-M Pekkola. The third full length album “Vartalovasara” has been released earlier this year and holds on all familiar influences of the band’s sound. Solid bass lines and hard-hitting kicks are sometimes achieved with melodic synth lines, but the main characteristic of the band remains the Finnish vocals. “Vartalovasara” sounds like being smashed by the hammer of Thor…

‘THE FINNISH ESSENCE TO THE SONGS IS THE SISU’

Q: The new album “Vartalovasara” features a different line-up. How did the switch from the original singer towards V-M Pekkola happened? What has been the impact of working with a new singer and what have been the reactions so far?

Seppo: I had met Vesa previously and had seen him live with Lola Kumtus. When he offered to cover Janne for ‘Famillien Treffen’ as one time show, I asked him if he could join the band. A new singer is like starting the band from zero so it took a little time to dwell together. I think since both last two gigs, we are in a state we feel confident about what we do.

Q: Sound wise “Vartalovasara” moves on with the hard, oldschool-EBM style, but what are according to you the main changes and evolutions in the global writing and production of the work?

Seppo: Everything is always evolving when you learn new things, but basically it stays the same. There were a little more hard-ware synths used this time. There were also a few, little experiments with more melodic songs as well.

Q: How did the writing of the album happened? What have been the different stages you went through to compose a song and finally an entire album?

Seppo: I usually have some subject in mind and then I start to write lyrics. That is the most difficult part for me. As I do a lot of demos it becomes easier to compose the song when the lyrics are ready. Quite often when I feel that a song is not working the way I want it, I completely rewrite it. This happened a couple times on the last album. When I listened to the album in its entirety it sounded too soft. So, I ended making harder versions from a couple of tracks.

Q: You claim that you ‘want to merge the Finnish essence in to their hard hitting old-school EBM’. I think it also explains why you’re still singing in your mother tongue, but what is this Finnish essence all about? What are the main topics we have to know –and maybe learn, about this essence?

Seppo: Language is a big part of it. When I listen to Spanish, Italian, German EBM, the language brings its own flow to it. Beside the lyrics the Finnish essence to the songs is the Sisu. There is probably no good word to translate it, but it is a mental state when you are doing something impossible, but refuse to give up because you’re determined to do it. In Finland we also embrace technology, but we also love to be in nature. Our dream of perfect living is to sit in the middle of nowhere by a calm lake, in front of a sauna and listen to the noises of nature. It is also about laughing and noticing the funny things which makes us Finns.

Q: The Finnish vocals definitely remain one of the main characteristics of your band, but it’s still impossible to understand one single word from the content. So what’s hiding behind the title of the album and its lyrical content? Is this an album with a message? Pure rebellion? Or something different?

Seppo: “Vartalovasara” means “Bodyhammer”. Long time ago we wanted to make a short film, kind of unofficial home-made sequel to the Tetsuo movies. It would have been called “Northern Bodyhammer” (“Pohjolan Vartalovasara”). The film never happened, but then I wanted to make it as a song. So, it is Tetsuo who inspired me to write this song about a man who turns into a biomechanical body hammer under the pressure of society. We used primitive Finnish rock paintings on the cover to show how the world would look like after the ‘bodyhammer-man’ has destroyed it.

Q: I think it’s rather unlucky to see the new album being released in times of the Covid 19 pandemic! Do you feel an impact so far and what are you doing –maybe together with the label EK Product, to manage this bad luck? How do you see things evolving?

Seppo: We have a of couple gigs that have been cancelled, but other than that it has no big impact on us. This is a perfect time to build out the studio and make new songs. I feel more sorry about small organizers who had to cancel their events. This kind of cancellations hurt small organizers badly so support them in the future anyway you can.

If we look at the silver lining of this epidemic I hope we start to appreciate more the things we have been taken for granted. Also I think when the epidemic is over both performers and audience will be so full of energy that we will have the time of our lives. 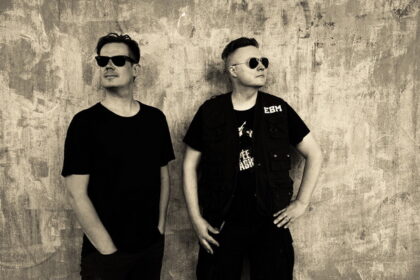