Columbian newcomers Resistor make no bones about their influences or their intentions on debut LP Driving Force: it’s old-school EBM all the way, with heavy influence from both originators and new anhalt acts. While far from 2020’s most original listen, it’s an energetic and well-edited take on a classic style.

Resistor frontman Leonardo Jaime (who also heads up Bogotá darkwave act Antiflvx) draws from blunt and direct European acts like Orange Sector and Spetsnaz, down to switching from English and Spanish to German for “Supernova”. The muscular bass and mid-tempo kicks make for a very musically unified experience across its ten original tracks (with the possible exception of the oddly And One-esque closer “Snow And Bronze”), and with nearly ten years preceding their first full-length, Resistor’s had time to cherry-pick their strongest material.

On the whole things are kept very economical on Driving Force to Resistor’s benefit. Bare-bones bass and synth programming never gets in the way of the core bounce, and the pared down melodic passages have all the more impact for their contrast with the stripped-down environs (see the light synth pings which augment the title track). In spite of the throwback instrumentation the actual execution and production feels smooth and up to date, and the band aren’t going out of their way to pursue rawness for its own sake. It should be noted that there’s a bit of a clash when Jaime’s vocals are recorded or delivered in a rougher style – on “Icarus” the disharmony between the sleek, skittering programming and the guttural vocals dropping in and out of the mix sticks out.

Without knowing too much about what sort of EBM is in vogue in Columbia, Resistor very much sound at one with the current crop of Familientreffen acts and the general EK Product ethos. As a genre exercise Driving Force works well and serves as a reminder of the enduring appeal of the purest strains of EBM. 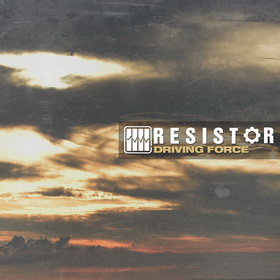