Finnish duoSeppo Ahlstedt – V-M Pekkola (the new singer) are back on track unleashing the third official full length album of their Oldschool Union project. The new songs have again been released on EK Product, which remains an interesting label for EBM .

It took 4 years to Oldschool Union to achieve this new work, but nothing has really changed. The influences remain driven by pure retro-like EBM. It sounds hardcore and all songs are again sung in Finnish, being the main specific of the work. The album features all classical elements of EBM; solid bass lines and hard-hitting linear kicks. Some songs are accomplished with a melodic-minded tune, but they’re never losing the aggressive power the work has been made of. That’s an aspect which is also reflected in the vocals filled with rage.

If you’re an adept of hard and pure old-school EBM, this Finnish duo will give you all what you want. It’s a classical EM format, but a well-crafted one. I prefer the songs, which are a little bit more elaborated with a tune in the chorus. The language remains the main specific aspect of the band, which makes that you directly recognize –even without understanding one little word, the band you’re listening to.

Oldschool Union didn’t change any single aspect from their previous works and yet “Vartalovasara” is maybe their most successful work to date. 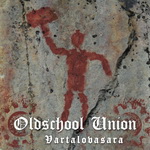