Background/Info: Oldschool Union is a Finnish EBM duo set up by Seppo Ahlstedt and Janne Vilen. They released their official debut album “Älä Olë, Elä!” back in 2012 on EK Product. They now strike back with this new work revealing 12 songs plus 5 alternative versions/mixes.

Content: The main influence of the band hides in their name: ‘oldschool’! This a rather traditional EBM sounds with a strong retro taste reminding me of formations like DAF, Nitzer Ebb and Orange Sector. It’s a hard-core format of body music carried by dark and dry bass lines, a straight forward cadence and angry vocals reflecting themes like politicians, corruptions and society generally speaking.

The main point – and still main characteristic of the band is that all the lyrics have been sung in their Mother tongue. So it will be hard and even impossible to understand one single word if you’re not Finnish speaking. The typical ‘ahh’ and ‘auw’ shouts reminding me of Nitzer Ebb are more familiar expressions and that is typical for EBM.

Oldschool Union main characteristic remains the Finnish language, creating a real particular element. The old-school formula is efficient, but even better when accomplished with some extra sound treatments like on “Henri” and on the “Original Mix” of “Narsisti”.

“Perjantai” is nothing new and a rather stereotypical exposure of good-old EBM. This album features no real surprises –except the language!

Conclusion: The lapse of time between their previous album and “Perjantai” didn’t really affect the inspiration of Oldschool Union, but the global production becomes more efficient and alluring. This is a cool release in the good-old EBM genre. 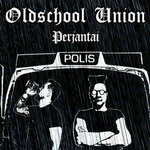