EBM is a genre that exists since the beginning of the 80s. During decades this style of electronic music was revisited in many different ways. One of the EBM bands you find in Finland is Old School Union. In 2012, Seppo Ahlstedt and Janne Vilen released Älä ole, elä, an aggressive and impressive album.

Now they return with “Perjantai” which is released on EK Product. This duo offers a mature EBM sound. From the beginning it is clear that Old School Union wants to drag you into its exciting techno dance vortex with the best of early EBM.

Perjantai contains 17 tracks, empowered with super bass lines, rigid sections of drum programming, linear sequences and of course aggressive vocals. There’s no doubt you are going to dance and spend a lot of energy on this powerful album that is mixed and mastered by Dirk Steyer of Accessory.

Among the 17 tracks, three of them really are superb: Perjantai, Eliiti and EKM as they’re full of power and energy, tracks on which it is impossible not to move your body!

So you have been warned : Old School Union’s new album “Perjantai” will seduce the real EBM purists. 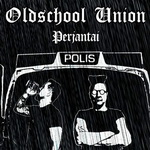