White Noise, Black Light, Cyber-larsen! The European Electro scene is proud to announce the release of an album that will no doubt become a cult-opus for all fans of Electro/Body Music/Industrial. Indeed, “Vaudou Electrique” is the debut-release of Belgo-French duo VUDUVOX, a.k.a. J-C VTH, frontman of Minimal-Electro/Synthpop act BUZZ, on vox and machines, and Olivier T., live-percussionist for GrandChaos and Industrial-Noise legends Signal Aout 42, on guitar. VUDUVOX provide a unique mix of drum-machine beats, pulsing basslines, abrasive guitar riffs, vivid flashes of minimal synth and dark vocals in French verging on the blasé. But less is more, and their thumping midtempo/uptempo anthems are bound to impulse your dancefloor. Their combination of tense atmospheres, electronic energy and politically -incorrect lyrics are the hall-mark of this great album featuring no fewer than 15 tracks interspersed with 12 short interludes, 68 minutes in all. After a flurry of warning shots, namely the “Sérénade pour un Renégat” demo, released in 2012, various remixes by or for the likes of Implant, Neon Electronics, SA42, Dolls of Pain, Bak XIII, People Theatre, David Harrow or Synthetik Form and fierce live performances alongside Psyche, Implant or Parade Ground – to name but a few – VUDUVOX are here to stay. Just press the start button and their highpotential sonic device will have you grind and bop till you drop. Co-produced as it is by Dirk Da Davo of The Neon Judgment and mastered by Implant’s Len Lemeire (CD album) and Pankow’s Maurizio Fasolo (digital album), “Vaudou Electrique” is an unmissable opportunity to experience with the radical electronic formula of VUDUVOX and check their vibrant Cyberclash mayhem: a masterpiece, no less. You’ve been warned! 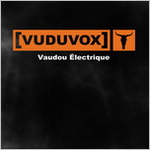