The return of the Hungarian duo is one of the most awaited and appreciated events for all the fans of old-school EBM’s sound: directly from Budapest, the legendary Escalator break into the scene with the same technological determination that has made them so longeval and famous worldwide.

The new album remarks with great effectiveness their inimitable music style that since 1988 connects elements Kraftwerk-oriented to the more advanced industrial alchemies, offering a tracklist in possession of each element to be considered winning: sounds electronically attractive, danceable rhythms, evolved formulas combined with implicit evocations of the best Cabaret Voltaire and Front 242.

The experimentation remains one of the basic principles for 2RT + TB who introduce into the new tracks many sound-processing that will delight the followers of the “intelligent” EBM’s concept, ensuring to the new release an exceptional visibility. After the great resonance obtained by the previous album “Out Of My Ego”, we are very proud to present Let There Be Lie, into which nucleus they whirl eight songs as fascinating as extraterrestrial sculptures.

To celebrate this spectacular re-entry, the Escalator will publish the album “Let There Be Lie” in only 300 copies recorded on vinyl limited edition, an event that the collectors should consider simply unmissable! The magnificence of the artificial sound created by a band among the best in its genre: you must wait from now for something extraordinary. 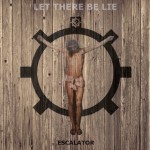 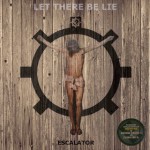