The global electro-EBM scene will be excited about this out of the ordinary release by Swedish EBM masters Autodafeh, a highly representative band that has always demonstrated how to combine a great compositional art with a perfect knowledge of the best sound guidelines, aimed at the spread of catchy, spectacular modulations.

The album “The Vintage Collection”, available both on vinyl and CD versions, contains some precious classics taken from the project’s past discography plus ALL NEW Songs, each of which characterized by an enormous potential. Schematic percussions, combined with vocals pronounced in cold severity and with minimal synths orchestrations, constitute the prevalent structures of all the episodes on the tracklist, which is loaded with electronic magnetism and danceable energy. That of Autodafeh is an exclusive sonic theorem, an eloquent example of how music can interact at the same time with brain and with the human locomotor apparatus, thanks to rhythmical linearity and to transversely melodic formulations, in which the logic of instrumentations becomes authentic propulsive dynamism, while the singer’s voice becomes a mechanism of dragging force.

No electro fan will be able to resist this stellar masterpiece. You will not believe what you will listen to! 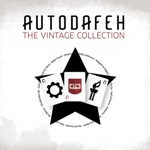