The unstoppable rise of Atropine, which began in 1994, has finally reached its pinnacle. The Norwegian project definitively confirms its validity by presenting itself again to its fans, bursting with energy and an even more advanced sound refinement by delivering a spectacular double album that will join the ranks of the best synthesized releases of 2020.

Human Emulsion is a powerful generator of dark-electro and industrial EBM sounds that are permeated with cold aggression and synthetic charm, transmitting restlessness, anger and torment. Claustrophobic atmospheres, advanced technological implementations and a touch of elegant complexity characterizes this Colossus of the new Era of electronic music, which stands out by virtue of its stylistically divergent and original contents. Linearly essential mid-tempo rhythms of drum programming, cold flows of sequenced minimalism counterpointed by exalted maximalist chaos intertwined with the maniacal and unhinged vocal improvisations expected from the project. Atropine amaze and upset throughout this scorching descent into the darkest recesses of the human condition.

The first of the two volumes of the album includes the twelve official tracks, while the second one contains a near mirror image of the first with thirteen remixes by Miza[R], Kant Kino, TourdeForce, SWG, Amnistia, 11Grams, Substaat, SLK, Impulskontroll, Amorphous, How Green Is My Toupee, Hexadiode and Pyrroline. Unmissable! 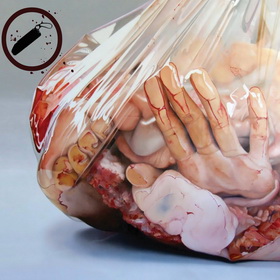