The formidable collaboration between the Australian Simeon Fitzpatrick (Project K11) and the American mastermind Rob Early (Retrogramme) originates this particular project which reveals itself as an evolutionary step in the entire electro musical universe. The partnership between the two artists is simply perfect, able to convey unique and technologically immersive sensations.

11 Grams formulate with rare skill an engaging sound system full of futuristic melodism, impressing the songs with their absolutely unique style. After having successfully debuted in 2017 with the previous full length “Panacea”, the duo-act now proudly proposes the new album Humanicide, in which the listener will be wrapped by a wide variety of avveniristic modulations, sometimes threatening or full of suggestive mystery and drama. Midtempo dancing drumming mechanically squared by the drum-machine, sequenced symmetries, powerful bass lines and solemn synths harmonies spread an alienating musicality, while the chant adds further catchy charm to the structures, proposing episodes vocalized by the seductive extensions of the female singer, alternated with the more aggressive and harsh ones of the male vocalist.

Electro, Industrial, EBM, they combine wonderfully to achieve the highest level of entertainment, reflecting both brightness and darkness at the same time. You will not resist so much sonic beauty and you will be overwhelmed by the desire to listen to this super album endlessly. 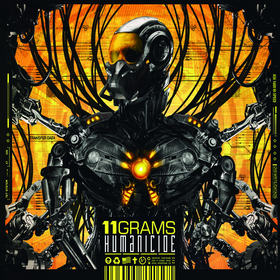