This Australian/American based duo have created an addictive Electro/Industrial/EBM/Synthpop style with catchy bass riffs, complex melodies and precise hi-tech musicianship. The twelve episodes included in the album “Panacea” reveal sophisticated sonic geometries full of fascination and dynamism, that will capture all the estimators of the advanced EBM transcriptions. Variable speed rhythms of drum-programming, futuristic melodies and android vocals, are the peculiarities of this absolutely exciting and technically perfect full-length, which will be particularly appreciated by the most experimenters of the new frontiers of sound.

Of great interest are also the three versions produced by important names from the electro universe, Atropine, Daniel Myer and also Xavier Swafford (3TEETH) who through their compositional genius add further value to the track-list. You can be sure that “Panacea” will leave an indelible imprint in your memory. 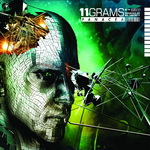