Hailing from Poland, but based in Sweden, La Santé is a band you might have discovered on a few compilations or the debut album “La Poulave” released on Halotan Records. Driven by Andree van Berg, La Santé found a deal with EK Product to unleash this new opus.

La Santé stands for pure old-school EBM. The songs are straightforward and remain unpolished. It’s a raw and somewhat electro-punk expression, which has been inspired by some pioneers of the EBM genre. The tracks remain pretty short, but very punching.

“Pogansky” stands for the real sound and power of EBM. It’s an album without surprises, but faithful to the single dynamic of this music style. La Santé composes songs without compromises and with this typical vocals characteristic as all songs are sung in Polish. If you’re into raw and unpolished EBM this work will definitely conquer your heart. I have a preference for the few cuts featuring extra metallic synth lines. It’s not really what I would call a lead, but a cool extra sound effect running through a few cuts.

I think it’s a pity the global sound production and mixing are suffering from a lack of professionalism. It might be the will of the artist, but compared to high-tech productions such as Spetsnaz, NZ, Orange Sector, Agrezzior and co, this work sounds more as a demo. The songs are pretty repetitive and without real climax.

This EBM album sounds a bit such as ‘back to the roots’ reminding me of times when bands were recording their music with a 4×4 tape recorder. It was cool to get your music on tape, but the sound was also a bit crappy. No doubt about it, La Santé is a band you’re going to like, or not. I’m not totally conquered although it remains a recommended work for body-lovers. 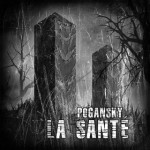