American duo Tim Krug and Jonas Miseh released their second full length by the end of 2019. Next to the CD-version released by EK Product –which also released their debut album “Ibex” (2016), they self-released a vinyl edition of “Metaxy”.

“Metaxy” is a mix between typical EBM elements, which are mainly emerging from the bass lines and the production of the vocals, and industrial sounds. Some metallic percussion parts are perfectly matching with this sonic fusion. Some of the choruses have something elevating. The more you walk through the “Metaxy”-universe, the more there’s a Frontline Assembly connotation running through the work. It’s dark and old-school like and yet with a contemporary feeling. Both last tracks are remixes by Guilt Trip and Blush_Response.

Hexadiode accomplished an interesting opus. I like this album for the sophisticated writing, which is bringing EBM and industrial sound treatments together. The songs clearly reflect an intelligent writing, but the album also reveals several great songs. There’s also something to say about the mature production work. Among the remixes I noticed a great contribution from Blush Response, but it’s also cool to see Guilt Trip, which seems to be back into business.

There are multiple noticeable songs featured at “Metaxy”, but this album is missing a hit song from which you can’t get away from. That’s precisely what a band needs to get in the spotlight.

If you don’t yet know Hexadiode and you’re in search of a well-crafted and intelligent EBM production, I can for sure advise you to listen to “Metaxy”. 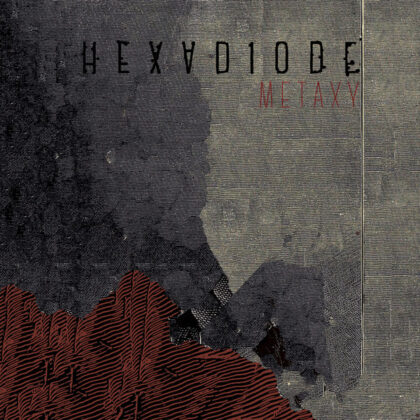