Hexadiode’s pulverizing sound was introduced to me in 2016 when they released their phenomenal album “Ibex” via EK Product; the blasting electro-industrial music was a grand venture into pulse-pounding dancey beats and experimental noise. They held their influences on their sleeves citing such acts as Skinny Puppy, Front 242, NIN, and Nitzer Ebb. But though these legends were reflected in Hexadiode’s music, the project did more than just copy previous formulas. Tim Krug and Jonas Miseh, the two masterminds behind Hexadiode, were able to create their own staple within the small underground electronic scene. What with songs such as the heavy hitters ‘Rive’ and ‘Synchrocidal’, I could not help but fall in love with the album in full.

Aside from releasing a remix album in 2017 titled “Contaminated”, Hexadiode has been hard at work on their new album “Metaxy” which is due out by the end of the month on October 31st. So, the question then becomes whether or not “Metaxy” is able to hold up to Hexadiode’s previous efforts. The abrupt answer is there is naught to fear as the album is quite the industrial affair. With mastering handled by Rob Early (Retrogramme, 11grams) and Krug and Miseh behind the synthesizer madness, “Metaxy” comes off as a wonderful industrial outing.

Stand out tracks on the album include ‘Brain in 3’. If I had to described this song, I would say it steps into the realm of cyberpunk horror with glitchy backing ambiance and an overall feeling of dread; it was well crafted. ‘Parasitic Static’ is a heavy hitting beast following traits of EBM; the approach to this song was quite violent echoing experimental nature. Lastly, the title song of the album is just pure old school electro-industrial; gritty guitars, metallic sounds, and a stompy beat make for one hell of a song. Blush Response also appears at the end of the album with a remix of ‘Brain in 3’ – the mating between Hexadiode’s output and Blush Response’s analog wizardry turned the song into a lovely dark, techno track.

I have but one complaint of the album and that comes in the form of the song ‘Invariant’. For as nice as the rest of the album comes off, I could not get behind the continuous knocking rhythm that served as the backing beat for the entirety of ‘Invariant”s duration. On multiple runs of the album this was the only song I found myself skipping whilst the rest of the album I let play out in its entirety. But, considering this one only lasts for a little under two-and-a-half-minutes, I was not all too disappointed that it was included on the final tracklist of “Metaxy”.

I was also fortunate enough to receive a physical copy of the album before its release. The vinyl I received is a translucent white piece which will look good whilst spinning on my turntable. The inner sleeve shows alternate artwork from the cover, and on the back the songs are listed along with their lyrics. I always appreciate this addition in records as some artists do not include a lyric sheet which is a bummer. The outer sleeve is lovely on its own, featuring artwork by Hexadiode’s very own Tim Krug, with the back of it listing the tracks along with an almost bloody like texture strewn across. This does not effect the score of the album, but whenever I receive something nice I always feel as if it is worth mentioning.

Hexadiode’s “Metaxy”, as stated above multiple times in multiple ways, is a wonderful industrial piece for the Fall of 2019. Though the year is coming to an end, there are still quite a few surprises remaining for us and this is one of them. The album is available for pre-order right now and I suggest you hop on that. 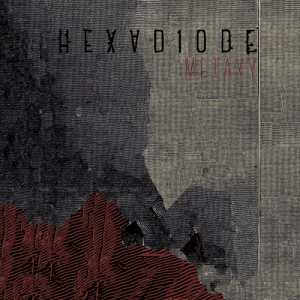