Upon listening to HEXADIODE’s Ibex, any old-school industrial enthusiast would immediately recognize the influence Skinny Puppy holds over this duo based in Dayton, Ohio. They do list the legendary electro-industrial act as an influence as well as Front 242, NIN, and Nitzer Ebb. Then again I don’t think there are many musicians in the industrial scene who aren’t influenced by these acts in one way or another. Needless to say, members Tim Krug and Jonas Miseh are using the bleak background of their city to create Electro-Industrial Hardware Warfare. If they don’t use that as a tag on one of their future records, I’m going to be disappointed because I was quite proud of myself for creating that phrase in a matter of two seconds.

Anyway Ibex is their debut album out on EK Product and spans twelve tracks with two of those being remixes from Protectorate and Textbeak. Right off the bat with Synchrocidal any person who has a love for boots, stompy EBM, and well executed electronic programming will fall in love with HEXADIODE. It’s not overproduced, it’s not shoddy quality; it’s a beautiful mixture of both. There’s a little old-school quality while maintaining modern production values and keeps everything neat and clean.

The lyrics are aggressive, sometimes growling, sometimes softer, but they never hold back anything that HEXADIODE has to say. ‘Turn to Zero’ is a real industrial anthem and will really put you into an industrial factory setting. Now, once you settle into the album and get your jaw off the floor, a bunch of the songs such as ‘Breaking It Whole’, ‘Contamination’, ‘Hexon Shift’, ‘Rive’, and ‘Computronium’ will continue to bring you back to an era of old-school industrial that has long since passed but lives on thanks to guys such as HEXADIODE.

‘Subatomic’ is a very stripped down song in comparison to the others with less layers and effects, while ‘Inversion’ is the one and only track on the album that’s softer and much more harmonic than the rest. It comes as quite a shock, but is a welcome two and a half minute breather track. The oddest song on the album is ‘Delta Film’ which takes queues from dark ambient music. Just imagine what a haunted eight track would sound like with whispers from HEXADIODE and the sounds of flies whirring in the air spewing out of it, and you have what ‘Delta Film’ essentially sounds like.

Protectorate’s remix of ‘Synchrocidal’ kept the overall mood of the original album’s theme of keeping it old school. They made the song louder and synth heavier, both of which were welcome additions. Textbeak’s remix of ‘Breaking it Whole’ made the track speedier, input some more bass here and there, and put an emphasis on drum’n’bass throughout the duration of the remix. Both excellent remixers on an already excellent album.

A lot of people like to claim that the industrial scene clings onto the past too much and never likes to move forward. I say fuck those people because taking influence from the past is what makes the future better than ever. HEXADIODE is a pure example of that and Ibex is amazing. This is definitely a record I’m gonna want on my shelf. 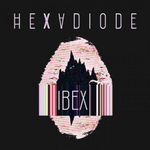