This Swedish duo already gained recognition and respect with their previous releases. They now joined the Italian based EK Product to unleash their new opus that features 12 songs.

When listening to this excellent formation it’s rather difficult to not evoke Skinny Puppy. The Canadian masters of dark-electro and EBM always have been a main source of inspiration for Guilt Trip and this new work doesn’t sound any different. From the very first track, which is a kind of intro-piece you immediately notice a strong early Skinny Puppy influence. It maybe appears to be an easy comparison, but not an easy job. Guilt Trip composes well-crafted and complex sounding songs filled with darkness and bombastic sounds. “Waiting In Pain” and “Tick… Tock… Boom!” both are remarkable cuts, which are much more than simply emulation. The band reveals an intelligent writing and who cares if “Brap:tism” seems to avoid any kind of innovation.

After an astonishing debut part the somewhat softer “Wormwood” brings a kind of break while accentuating the complexity in songwriting. The 2nd part of the album remains fully interesting, but I can’t speak here about potential hits. M.Nilsson and K.Lindberg revealed their talent to compose spooky atmospheres carried by pure electro-bombast while the songs also reveal a good balance between electronics and guitar. The guitar playing injects an extra powerful element, which also sounds a bit experimental-like. “Claptrap” is one of the most noticeable cuts in the genre. One more noticeable songs is “Tail Of A Whail”, which is a fully accomplished track. A last essential aspect of this work consists of the vocals, which are dark and harsh. Vocals and music are totally complimentary, which resulted in this typical and exciting haunting electro style.

Guilt Trip is a great newcomer at the EK Product roster, which injects more diversity to the EBM style the label is dealing with. But the new work by Guilt Trip also is a fascinating composition conceived with intelligence and resulting in a few outstanding songs. 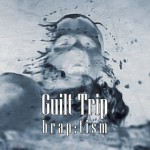