Mastodontal album that reaches almost all the way.

Guilt Trip returns not only with one, but actually two full length albums in one package and on Body:Parts they’ve assembled what they have put together since the release of Brap:tism in 2015.

“The Great Leap Forward” begins as a low paced twisted story with beautiful synth work that instantly provide vibes from the genre’s most original acts of the 80’s and 90’s. The vocals on “A Pit of Shit” is reminiscent of Ohgr’s latter angry styled voice on Skinny Puppy’s Weapon from 2013, and Guilt Trip’s main sources of inspiration are indeed quite obvious. A fun detail is also the striking resemblance of the cover compared to the one of Front Line Assembly’s Caustic Grip from 1990.

“Chains” continues the beautiful background synth work from the introductory track, albeit slightly more melancholic and inserted in a slower and slightly more laid back production. The first track that really stands out from the main template is “Bite the Bait”, where playful electronic sounds interact with minimal tones and a sort of muddy bass line. The song is a play with pace, tone and words in a combination that instantly puts a smile on my face.

What one could miss is that real dancefloor stomper that turns the pace and that adds some aggressiveness. Unfortunately, the first half of the album continues in the same calm spell and without any big exclamation marks. We simply have to hold on for the second that turns the pace on the second track “Burn to Death”, which is the longest track of the double album and it ends up somewhere in between aggrotech and psytrance. The chorus could be compared to some of VNV Nation’s most danceable and euphoric dance floor hits.

The lyrics deals with both major and minor topics of the world, society, democracy and fascism. The red thread I find is how the ones with all the power always seem to pull the strings for everyone else.

The wide synths and electronics of the melodic “Nemesis” makes it the most DJ-friendly song so far, with its catchy lyrics that immidiately falls into place. “Blood Flood” is a uplifting story both lyrically and soundwise with its pacey guitar riffs on top of the four to the floor beat. Industrial music equivalent to The Offspring perhaps? The final “Fashcismus Ein Verbrechen Bleibt” is a pure EBM track that falls naturally in line with the new oldschool wave of EBM that has been a popular take from Swedish acts of the past 10-15 years and that with dignity still keeps the flag flying high.

On the whole, it’s a pretty sprawling album that has no real USP (Unique Selling Point) and that mixes together a variety of styles with different pace, instrumentation, appearance and songs that doesn’t come together all the way like on for example Fix8: Sed8’s amazingly tight and held together Foren6 from last year.

Guilt Trip is on some tracks staggeringly close to ill-fated glitches of their sound stage, even if they ultimately cluster the whole thing together in a consistent way. The tops are very high and the overall impression of this 24-track mastodontal album should be praised, but it may still contain too many tracks to keep the audience on their toes and get the full focus of its listener. 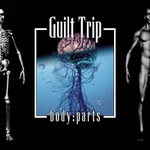