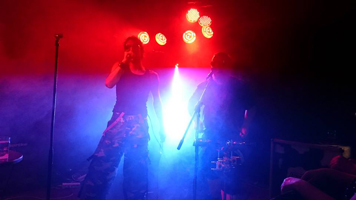 “It’s all about The glory of manliness, having fun and not taking life too seriously.”

Bodykomplex was formed in 2012 when two guys from northernBodykomplex – Finland Finland decided to make a few old-school style EBM songs just for fun. When they noticed that people were listening, they decided to make more songs. The stories behind the lyrics come from the tales of everyday life, told in somewhat humorous way. Lyrics are made in Finnish because it comes naturally and sounds awesome. In summer 2015 they signed a contract with EK Product Label and their first album “KARMA” will be released on 16th October 2015.

What is the song you would like the readers to hear while reading this (link):

Identify yourself/yourselves and the band/project in question:

We are Bodykomplex from Northern Finland. Nice to meet you.

What’s your band all about said in one sentence?

Having fun while growing / progressing as a band.

How would you describe your music and your biggest influences and idols:

Our style is mainly mixture of old and new sounds of EBM, and some people say it´s not just EBM, it´s unique EBM. We listen a lot of different styles of music, so to list all the ”icons and influences” would take a ridiculous amount of time. Mainly we try to find the inspiration in ourselves and from daily life.

Short history of the band/project (who/where/why):

Short and sweet: Bodykomplex was formed in 2012 when we decided to make a few old-school style EBM songs just for fun. Lyrics are in Finnish because it comes naturally and sounds awesome. In summer 2015 we signed a contract with EK Product Label and our first album “KARMA” will be released on 16th October 2015.

What lays in the future for you?

Hopefully more gigs abroad. We are always ready to throw energetic shows. When the debut album comes out, we are already heading to studio to record the second album.

What would be your last words if you had to say them now?

Releases so far and soon to come:

Links to your sites:

Thank you for your time.