Here we are to talk about another musical act born on Soundcloud, a platform that allows several guys to make people know their music, an act that, after having released some songs, was found by the italian label EK Product, that then produced their debut album. We’re talking about finnish Bodykomplex’s Karma. The duo is composed by two “masked” guys, Kris and Olaf, who make the classic old school EBM formula that several acts have already made before them, and until this there’s nothing new.

Anyway, what only apparently could be felt as a monolithic and repetitive work (as the most part of this kind of works), it is a rather interesting work that maybe will not become part of the genre’s history book, but that surely will be appreciated by this genre’s aficionados. The only issue of the Bodykomplex’s album is the production: the beats, in fact, have a turned off sound which discharges all their explosive strenght.

Karma is an album that, in order to be fully understood, asks to be listened several times due to its beat’s sound that makes apparently feel like it’s a rather weak exercise. After having listened to it over and over again, after an initial hesitation, a series of particular traits will be listenable, traits that elevate the album above the average genre’s productions level: let’s just think about the melodic synthesized patterns slightly influenced by synth pop music, even if quite scrawny, in which sometimes north european atmospheres echo, such as in Neuvoa antavat, “Häkkilintu” and “Tragedia Petoksesta” and about those that, at the contrary, look to the East, such as “Kumipuku”, “Tee Se Itse Mies” and “Selviytyjät”. The last one of these, in particular, is the best album’s song, as it differentiates itself a bit from the classic old school formula, characterized by a melodic pattern influenced by the Eastern sounds to which a much important weight is given if we think to the other album’s episodes (thanks to a break given to the constant beat) as well as by interesting rhythmic variations.

This episode won’t surely be that that will make them famous in the club scene, although all the album’s songs are potentially hit singles that will perfectly suit into the dancefloor, but rather the following Karman laki will suit very well as it has rather different sounds, more “pumped”, and that is perfect for stomping. Another rather interesting episode is “Häkkilintu” in which it’s possible to listen to vocal metres inspired by rap music.

Although some original traits and creative flashes are present and a bit hidden not to displease the straight old school EBM fans, the album flows rapidly, maybe even too much, showing fourteen short songs that last not more than three minutes and a half always characterized by a 4/4 beat, songs that often run rapidly such as the opener “Kela” e “Kumipuku” and slower songs considerable as uptempo episodes such as “Selviytyjät” e “Neuvoa Antavat” (this last one highlights the irony and the carefreeness of their lyrics, and, in general, of their music, and this is listenable even in the sampling of a belch, maybe due to the umpteenth beer drank).

Although the lyrics can’t be easily translated even with a translator, they talk about everyday life experiences, always using a funny approach, without never taking themselves too seriously. When we are in front of an old school EBM album that lasts only a bit more than half an hour, the conclusion that can be made is always the same: a good act as well as many others, even within the same label’s roster, but how many acts will succeed in creating a more original sound in their following releases? Undoubtedly, Bodykomplex (even without being, like they show on this record,complex), with Karma have made an enjoyable and good album and, above all, very live-oriented and dancefloor-oriented. 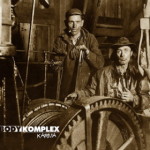