EK Product has realized a monumental, reasoned work, simply indispensable, in which the listener can retrace a crucial segment of the History of technological Music created by one of the more valid underground-bands from the 80’s / 90’s rearguard, which in two decades has been able to establish itself permanently and honorably in the alternative-electro panorama. “Archive” is a compendium of considerable stature, which summary of the most important discographical features of the Finnish project testifies exhaustively all the sagacity and the inspiration of Jana and Vince, two unforgettable explorers of the electronic front. Owning this double-compilation is categorically imperative for any true connoisseur and collector. The Advanced Art, after many years, hit and win. Once again. 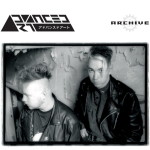