Let’s go back for a moment in the ‘90s. It was 1990 when the finnish duo Advanced Art made their first EP, a duo born five years before, but that that year, for the first time, released the result of their work. 1990 was a fundamental year for the development of electronic-industrial, as well as for EBM and for electro-industrial music, and Advanced Art were characters of this merging between synth pop, often fast post-EBM rhythmics (rhythmics that someone, some years after, would have labeled proto-electro-industrial) and dark echoes.

This is not a particularly well known project and maybe is not one of the most original projects of those years, but its music has surely strongly been influenced by a series of fundamental albums, made that year: Skinny Puppy’s Too Dark Park, Front Line Assembly’s Caustic grip, Leather Strip’s The pleasure of penetration, without forgetting Depeche Mode’s Violator. Besides music, those were also years characterized by a particular attention – and fear (at the same time) for the new millennium that was near and by the focus on the cyberpunk topic (also thanks to movies such as Blade Runner, but not only that, considering how, also in the artistic field, several artists, during that decade, worked on Virtual Reality experiences). In fact, the so called electro-industrial focused on topics such as dystopias and the Orwell visions, and these are the same topics faced by Advanced Art: the depersonalization of the human being caused by the speed increase of technological development (conceived as a treat), the alienation and the fear of the future and, in a certain way, a refusal, a typically ‘80s and “dark” compliance (the duo have began to play during the ‘80s, and also their look highlights their roots).

It seems that, although twenty years have passed (now almost twentyone) since the disbandment of the project, Advanced Art haven’t been forgotten, as predicted in their song No future (in which it’s written that there is no future for us), and, in fact, the italian label EK Product has made a homage to this not so well known act that, however, seems to have had a rather important role in what would have followed afterwards, including in this the label’s current bands, that maybe today, even if only partially, have been influenced by Advanced Art’s work. The double album Archive is the result of the recovery of a sound that maybe today could seem old fashioned to us (and surely it is), but that isn’t ordinary, even if their influences were always listenable and even if it’s difficult to say that they have found a really original formula.

The first disc is an archive containing several kinds of songs, sometimes closer to a genre, sometimes to another: there are very fast and strongly electro songs such as the opener From nothing to nothing (an emblematic title, a choice we’ve talked before) or Your product and Flesh, but there are also present more strongly synth pop songs such as Wake up, Tear open these scars or Blind, and there’s also an instrumental space age song particularly influenced by canadian electro-industrial, Anthem. Their music is definable as the compresence of a vocal line particularly similar to that of Dave Gahan, a end-of-millennium synth pop embellished by heavy sci-fi movies atmospheres and fast and entangled post-EBM rhythmics as those used in the ‘90s (that even today are appreciated by a large slice of listeners), the whole embellished by an apocalyptic- melodic taste.

Their synth pop, although sometimes linkable to Depeche Mode’s early works, is never positive, but a straight expression of paranoias that in those years were clearly present, and their music is surely the result of a tastable discomfort, much more than the will to make music for fun. Also the sampling, even if not particularly listenable, is an important characteristic of a sound that, in those

years was the standard, and this can be listenable in ‘Til i beg for mercy, and some proto-industrial embellishments can be listenable in Your product, that have the goal to show musically an anti- capitalistic message, embellishments consisting in the sampling of typically industrial working tools, such as the pneumatic drill (that makes us think about Einsturzende Neubauten).

The second album presents some demo versions that makes us understand how Advanced Art initially were more inspired by synth pop music than by industrial music, and also presents us their live performances dimension, particularly energic and characterized by a rather strong punk imprint.

However, Advanced Art didn’t find a great success, and in 1995 they disbanded during the early years of the so called EBM crisis, maybe because of a not so original formula or because of the lack of ideas, after five years of great development of the genre and of the raise of several different musical approaches that even today have an interesting fanbase, but today, thanks to EK Product’s efforts, we can listen again a work, that of Advanced Art, never ordinary; at the contrary, it’s a pleasant trip in the past, that makes us rediscover a too often forgotten gem. 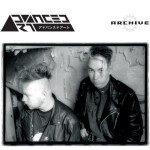