A wide range of styles from a skilled collective.

The Australian Simeon Fitzpatrick (from Project K11) and American Retrogramme-acquaintance Rob Early have put their heads together under the band name 11Grams and along with a number of guest vocalists and musicians they now present us to their first album “Panacea”.

The first impressions of the arrangements on “Panacea” are that it uses some quite familiar electro-industrial blocks to build the foundation, some borrowed from this scene’s perhaps most famous acts. “Machine Malfunction” and “Immortal” (with a vocal guest appearance by Chad Collier from Impulse Control) are the most obvious examples of this, as they come dressed up in a quite Vancouverish electro-industrial suit with the classic raw, bold and dystopic futuristic appearance that usually comes with it.

But everything is not always as it seems and just like when it comes to Rob Early’s earlier music project Retrogramme, the surprises are many. “Panacea” is painted using a extremely wide palette and retrieves its influences from a wide range of styles, which emphasizes that 11Grams definitely wants to appear as something much more than just another Front Line Assembly wannabee or so. The addition of rap in “The Stalker”, delivered by guest starring Roy Retrofit from Red This Ever, makes me think of experimental acts like Meat Beat Manifesto, while the techno influences are quite constant all the way through the album. Most clearly they appear in tracks like “Feel It Like a Drug” and “Visions” (starring Wojciech Król from Clicks and Controlled Collapse), which reminds me of the early days of Velvet Acid Christ with constantly present acid synths, samples and tastefully inserted sounds and effects. When it then comes to the three instrumental tracks offered, “Cutaneous” is the one what I find most interesting. Eastern choirs and twisted IDM- and dubstep styled details are jointed by a thick and beautiful arrangement of strings and other background sounds.

“Panacea” doesn’t contain that many weakers tracks, allthough I could find the remixed versions, apart from Daniel Myer’s superb dance floor version of “The Stalker”, somewhat superfluous aswell as the somewhat irritating electropop song “Synthetic” (with Lisa P. Duse). In its whole, however, the album consists of a good combination of tracks from the highly skilled Rob Early who possess both the technical knowledge needed to create a complex yet catchy and stylish soundstage, while also showing alot of courage to blend in so many of different styles on one album. 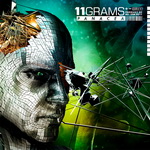