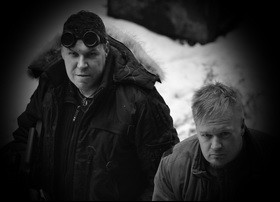 Spring 1993, that is the era when KIFOTH appear on the world of music. K-head (composing, programing, sampling, acoustic performance) and mir Colon (philosophy, voice, sampling, programing) established KNEEL IN FRONT OF THE EXECUTIONER.

The protagonists of the KIFOTH made the first striking sign on March 1995 with live-performance together with industrial legend Einleitungszeit, also Brazil Morgue and domestic Morbid Fancy. The first album CIVILIZATIVE COLLAPSE is the element of rhytm that conquers all around by its aggressivness and straightness. The Slovak electro-fans were amazed with the show.

To be proper, there is released first-live-tape FIRST TIME PUBLIC before the mentioned above. The tape maps the first material did in Slovak language. A very first live-performance. The third record is EBOLA. This album is remastered and re-released on April 2004, as 10th anniversary celebration, by Vuz Records, including exclusive remix of song “Possessed By The Right To Modify”.

KIFOTH uses English language, but it wasn’t so all time. The live-tape includes song sang in Slovak language only. This epoch well known song is “Ježiš Kristus” (Jesus Christ). Original version is on “Civilisative Collapse” tape. A natural continuance is seen on the Ebola as song Last Sermon. As bonus of album “Acerbity Torrent” is 2006 version of the “Ježiš Kristus”.

Year 1999 is debut time. KIFOTH’s first CD SPECTACLEBREAKERS made by Slovak label Front CD Records. Due to a perfect arrangement, German electro-giant Out Of Line took exclusive west Europe & Interbeat made the America. The same year means the first Europe touring for KIFOTH. K-head & mir Colon with S.O.L.O. as drummer went around the middle Europe as supporer of Mexican star HOCICO. Since 1999 KIFOTH exihibits regularly on Wave Gotik Treffen festival.

FUNDAMENTUM DIVISIONIS is name of the second CD. The exucutioners flow down into deeper spheres with this album. Dark music, harsh philosophical attitude. As if my words are confirmed with mir Colon’s health upset. The singer puts the KIFOTH’s future on uncertainty due to his dificult carcarsh. So the time of neverending waiting comes.

Audience of Strange fest’03 at Pelhrimov, Festival of electro-industrial music at Prague, Apocalyptic Vision vol.4 at Bratislava, Hulifest’06 had the oportunity to take the experience with the new material. A concert that makes a cut through the whole band history. It seems KIFOTH goes ahead to find out the needed sound and performance, developing the philosophy. All this for to stand KIFOTH back to the pedestal which belongs to the band.

Internet fan has the chance to check out the development of album ACERBITTY TORRENT with the song “Paradox (Heaven Icon mix)” on WEB compilation www.be4.aliens.sk. German fans can find song “Proper Behaviour” on CD compilation Bodybeats, Cop International. As the 2006 pre-promo of the forthcoming album, KIFOTH made “Tyranny set” (song, video, picture). mir Colon comments: “I do like very much the track. At first, it is a reflection of the actual world wide being. And from the other side, the music is about decoying retro-elektro punk beat with rap element. The album temper is a mosaic of various themes, styles, basically said type of songs.

The executioners let out even message that they feel themselves more generous accorning to their electronical being. They’re extremely fastidious on themselves. As frontmen’s confesion: “The ACERBITY TORRENT is slushed with blood of abused, full of desparation tears, worried by hopeless sob. It is full of my drafts of hate toward man slightness, toward my mate. All this under circumstances of being modern civilization”. And the CD, 70 minutes of relentless electronic assault, perfectly blending the purest elements of old school EBM, authentic dark elektro and technoid beats is released by EAR/Vendetta.

New album “Violence Corporation” has risen similarly as the “Acerbity Torrent” album. The composing took about 2 years. The music is well-knitted. The authors fixed themselves making the mixing better than ever before. Therefore, the intention is to keep the little difference as maximal as possible but the compactness should stay inviolate. I am surprised that it sounds fine even if it has been described so intricately. I had a chance to be closed down in the studio with KIFOTH. The album delivers high-class sequences electronics mixed with elements from the industrial scene together with powerful rhythms and dark beats infused with crazy techno influences. Slower and more emotional tunes are also present like in “Egotism” or like the futurepop-ish “Vermicular”. I really like the opener “Microbiotics” but do not forget about “Jihad” or “Manipulator” which are two heavy tracks.

In December 2016 the band sign a new record deal with EK Product. Described as their most ambitious album to date, KIFOTH’s seventh full length EXTENSIVE REPORT will be out on March 3rd, 2017.