The two originally joined forces midway through 2018 for a quick and easy one-off project, to to record just a single song. The cooperation felt very easy and natural though, so they chose to keep at it, and more and more songs just kept coming.

There was no real concept planned ahead of time as such. Rather, the band grew into what it is based on a shared interest in music as well as finding common ground in things like military aviation, old aeroplanes, jet fighters, space flight, science and so on.

By and large the division of labour is such that Ville writes the music and Arttu the words. The lyrical themes revolve mostly around human psychology, interpersonal issues, mental health, love, grief, and loss.

Aeronaut V builds on the warm and fuzzy sounds of analog synths and Arttu’s soft, dark voice. Retro electro is the term that would best describe the sound and production choices. Aeronaut V relies heavily on old school electronic music and the new wave movement. It’s all about the buzz and the beat. 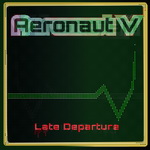